The infectious positive energy of Canadian trombonist, pianist and composer, Hugh Fraser, has internationally been described as the definition of a true cosmopolitan artist.

Determined to devote his life to music at the age of 6 as a drummer, Hugh added the trombone and piano to his instrumental arsenal to complete the musical circle of rhythm, melody and harmony allowing his creative voice to expand exponentially through composition, both written and improvised.

After two years of intensive study with Vancouver trombone legend, Dave Robbins, Hugh developed a worldly view of music at the Creative Music Studio in Woodstock, New York. This led to Hugh forming the 1980 co-­‐operative Vancouver Ensemble of Jazz Improvisation (“VEJI”), which after many critically acclaimed performances, awards and recordings, is still active and is currently featured in the promotional materials for the 2011 Jazz Plaza Festival in Havana Cuba.

While residing in New York, Hugh contributed to legendary jazz ensembles such as Maynard Ferguson, Clifford Jordan and Slide Hampton’s World of Trombone’s latest recording where Hugh contributed as the only Canadian participant as a trombonist, pianist and composer.

Hugh spent over a decade in London, England where he studied, performed and recorded with fellow Canadian, Kenny Wheeler, including the seminal ECM record Music for Large and Small Ensembles with Peter Erskine, Dave Holland, John Abercrombie, Evan Parker and many of England’s leading instrumental artists.

As an educator, he was proud of his evolution from student, faculty member, and ultimately head of the jazz program at the Banff Centre of Fine Arts. Here he founded the Hugh Fraser International Jazz Orchestra Workshop which he presented in Ireland, England, the United States and most cities across Canada. In London, England, Hugh designed and delivered the composition component at the prestigious Royal Academy of Music for over a decade.

Hugh has been voted Canadian Trombonist of the Year many times and as the only Canadian participant in Orlando “Maraca” Valle’s 2011 DVD release of the Latin Jazz All Stars, he is included in the top six albums in all genres by Downbeat Magazine. He also performs regularly with his dear friend Chucho Valdes where one of Hugh’s additions to this iconical pianist’s composition has been standard performance and educational fare in Cuba.

Hugh is now focusing on international touring, and making his several hundred compositions and recorded performances available through his publishing and recording companies while returning to his prime directive of spreading peace and love through music. 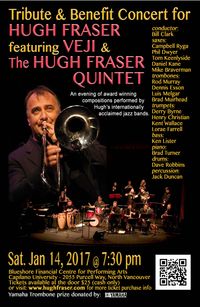